Davido has been pictured using crutches after he fractured his left leg.

His lawyer, Bobo F. Ajudua shared photos of the singer grappling with crutches while wearing a medical walking boot for broken foot.

He wrote in his caption: ‘How some people chose to enter June. Nawa. At some point yesterday we were literally thanking God there are no shows right now. Get well soon bro @davidoofficial.’

This was one of the most attractive songs from Davido’s sophomore album, ‘A Good Time.’

Details/Takeaway: The morning Davido released A Good Time, ‘1 Milli’ began trending on Twitter NG. The song resonated due to its story of love and marriage. It also coincided with Davido’s recent engagement to Chioma Rowland.

In the video, Davido created a mock version of his impending wedding to Chioma Rowland.

You can watch the video below;

Davido has sent a congratulatory message to his father, Adedeji Adeleke, on the acquisition of another private jet.

The music star took to his Twitter page on Sunday, March 1, 2020, where he shared a photo of his father sitting at the cockpit of his newly acquired jet.

His latest acquisition is a Bombadier Global Express 6000. According to publisher, Dele Momodu, Adeleke’s new jet is worth over $62m.

Davido had earlier announced the purchase of the private jet. At that time, we weren’t sure if he was the one who bought it for himself or it was another acquisition by his dad.

Congratulations to the Adelekes on this huge buy. Two years ago, this wealthy family got for themselves a private jet and Davido couldn’t keep calm. 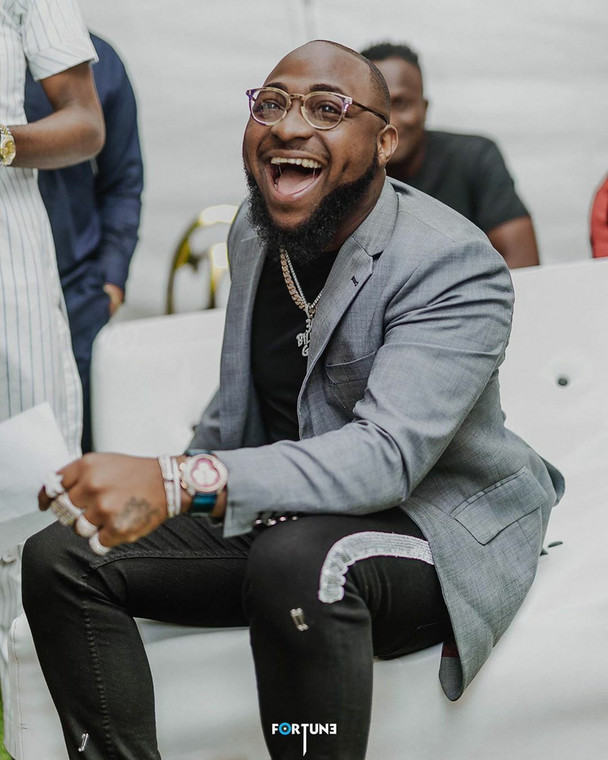 Davido’s father, Adeleke Adedeji, is one of the richest men in Nigeria. [Instagram/DavidoOfficial]

He took to his Instagram page where he shared photos of the new jet. It was later confirmed that the jet actually belongs to the senior Adeleke.

Davido and his fiancee, Chioma, look so in love in these new photos.

A man whose address was given out as that of singer, Davido, online has cried out as it has left him in a ‘not so good’ spot.

According to @hectorconcarne, he wakes up to people randomly singing and rapping in front of his house, receiving mixtapes and seeing people coming over to greet “baby”.

He tweeted “@iam_Davido I think someone put up my address as yours online.for a while now Been waking up to people randomly singing and rapping in front of my house not even counting the mixtapes they send,and for the past month people randomly come to greet the “baby” amongst other things.

“lol please I’ve posted it everywhere that it’s a wrong address but they just keep coming ! I just want to sleep well without someone screaming “OBO PLEASE HEP MY LAIVE” At my window sigh

Drop your best caption for this new photo of singer Davido and his fiancee, Chioma Rowland.

Davido’s newborn son, David Ifeanyi has been Christened. In the adorable video below, the singer who welcomed the child with his fiancee, Chioma, was filmed praying for his son at his christening ceremony which took place earlier today (Nov.9).

Watch the adorable video below.

Davido to release ‘A Good Time’ on November 22, 2019. (Instagram/DavidoOfficial)

A few weeks ago, Nigerian superstar, Davido announced the title of his new album as ‘A Good Time’ to industry people and journalists at an event in Lagos, Nigeria.

At the event, he also played them a few songs. While Nigerian rapper, YCee had been jokingly nervous about releasing his debut album, YCeevsZaheer on the same date as Davido, he might be happy at Davido’s release date.

A few days ago, he released the ‘Risky,’ the second single off the album.

Popular Nigerian singer, Davido has revealed that he is set to release another hit single featuring American singer, Chris Brown by next week.

The song follows the successful release of their recent collaboration, ‘Blow My Mind’ which garnered massive number of views on YouTube.

The award-winning singer broke the news on his official Instagram page, and it has generated a lot of reactions.

The new song is produced by Kiddominant, who is behind the singer’s record-breaking track, ‘Fall’.

So Davido and Chioma are engaged for real [for real!] and the #Assurance2020 ball is now well and truly rolling.

Introduce Davido to your family – check!

Get engaged to Chioma with a huge, gorgeous ring – check!

What we can look forward to is a super-lit wedding that will not only be the toast of society, but will also shut down social media and top ‘Trending’ charts for hours on end [maybe days].

Not much is known of the wedding yet, but from all we know about Davido and Chioma’s love story, here is how we imagine the wedding ceremony[ies] will be like.

When will the wedding be?

Davido himself has constantly used #Assurance2020 as the preferred hashtag for the coming wedding. So next year it is. Whether it will be in the first half or second half of the year is what we can’t tell for sure.

But if we’re to guess, we’ll say Davido may want to choose a date that commemorates his late mum, Veronica Imade, who died in 2003.

The singer is known to always give a shout out to his mum, and even sentimentally named one of his daughters after her. So, maybe the weekend of her birthday then?

Where will the wedding take place?

For the traditional wedding, there can be no doubt as Davido himself already said it will be at Eko Hotels And Suites. So let’s all start booking our Aso Ebi as we look forward to another Eko hotel shut down!

To give you an idea of what to expect at an Eko Hotel wedding that truly, really bangs. It is the smashing, headline-grabbing success that Davido and Chioma would be looking to replicate.

The other ceremonies aren’t known about just yet. But where else would the court wedding hold at if not the Ikoyi registry where all celeb court weddings hold?!

We’re also guessing the church wedding will be anywhere outside the country. Maybe in Atlanta, USA.

You know, as per Davido’s mental line in that ‘Summer Body’ song with Olamide “my name is Davido… omo Atlanta!”

Will Wizkid perform at the traditional wedding?

One thing you can be sure of is that the traditional ceremony of #Assurance2020 will be such a huge parray!

There will surely be musical performances and the industry friends of the groom-to-be are expected to turn up the heat in the room.

We really won’t be surprised if Wizkid was invited to perform at the ceremony. Don’t forget that time Davido surprised us by bringing Wizkid up for a performance at his show in 2018.

Kizz Daniel may be called to perform his song ‘4Dayz’ as well. That was what Davido and Chioma were playing during the ride back home after the man proposed.

Tiwa Savage, Mayorkun and a host of others should bring the party on the day too.

Maybe Simi and Johnny Drille for some love ballads before the party party gets down.

Guest list. We won’t be surprised to see Chris Brown

You can expect the crème-de-la-crème of the music, politics, society and entertainment circles to be there at the wedding.

And given Davido’s budding friendship with Chris Brown, what’s to say he won’t be part of the guests at one of the ceremonies at least?

Over here, we are willing to bet that Chris Breezy will be at Eko Hotel on that traditional wedding day, wearing agbada and dark shades to enjoy confam Nigerian party jollof, alongside the who-is-who of the Nigerian social circles of course!

What will the bride wear?

For the traditional wedding particularly, Deola Sagoe looks like the go-to designer. So we won’t be shook to see Chioma dipped in the blinking goodness of one of Deola Sagoe’s designs.

Most definitely, Davido’s well-known crew will feature in more ways than one on their man’s big day and we can see groomsmen duties being part of the roles they’ll play.

Peruzzi, Mayorkun, Lati, B-Red, Aloma, Prince, Sabako, Tycoon and others will make up Davido’s groomsmen/agbada gang or both.

We are fully looking forward to seeing Davido’s uncle, Ademola Adeleke, the dancing senator to come with all the energy on the day.

It’s even been a while since we’ve seen baba throwing it down anywhere. Between losing an election and the subsequent election petition that followed, we understand there might have not been so much time for dancing.

But Davido and Chioma’s #Assurance2020 will likely change all of that.

And if fellow celeb senator, Dino Melayesomehow shows up at the wedding too [we suspect he’ll be there], you can expect nothing but lit, lit moves from the both of them.